Fairy Tales are books with magical stories within them. The prince saves the princess by fighting a dragon. Little Red Riding Hood is on her way to grandma’s. The three little bears find Goldie Locks in their homes. The wolf blows the little piggy’s house down. We know what happens in different Fairy Tales. However, do we know how they began?

In honor of today, National Tell a Fairy Tale Day, let’s take a voyage into the origins of Fairy Tales. Fairy Tales are stories told in ancient times and they still exist in present day. These stories aren’t like legends and aren’t like folklore. They’re not based on religions and don’t references to anything realistic (All About Fairies). They are stories with goblins, dragons, witches, giants, princes, princesses, and even talking animals and so much more. “Once upon a time” the most common opening in Fairy Tales shows they don’t have to do with an actual reference of date or place or time (All About Fairies). They are a world within words on a paper, they tell a magical story to be discovered.

One of the oldest tales is The Smith and the Devel which was first made before the Bronze age (3000 BC- 1200 BC) (All About Fairies).  To be more exact, fairy tales originate from Egypt and the origin story of fairy tales began in 1300 BC. Even Rumpelstiltskin and Beauty and the Beast are ancient Fairy Tales (All About Fairies).

Did you know that the original Fairy Tales were actually intentionally made for adults? It wasn’t until the 19th and 20th Century that Fairy Tales became to be more directed towards children (All About Fairies). They were so disturbing, that fairy tales began to be made more family friendly and this is how it began to be directed towards children, and everyone of all ages. For example, in one of the English originals, in The Three little pigs, the wolf actually eats the first two piggies after he blows the straw and stick house down (Original Versions of Fairy Tales).

It is a good thing they changed up the story to make it more family friendly!

The STU Library has a poster exhibition that was put up by the Favalora Museum. This exhibition is to remember Black History Month and a way to celebrate it. It will be up until March 6 so hurry up and come see the exhibition!!!

Now on a side note, this may not be a common question, but it sure is one to keep in mind! Why is February known as Black History Month?

Well here’s what was found as the answer:

Jeff Wallenfeldt has written what he found about the answer to the previously very important question. American historian Carter G. Woodson was inspired into finding the origin of Negro History (Wallenfeldt). He attended a three-week national celebration of the anniversary of the Emanicipation Proclamation in 1915 and joined other people in founding the Association for the Study of Negro Life and History, or the ASNLH (Wallenfeldt). The ASNLH encouraged scholars to engage in the study of black past which was highly neglected in schools during this time (Wallenfeldt).

A specific information was found out that began the events into celebrating Black History. February is the second month of the year. Furthermore, February is also the birth month of two people that are highly important in Black History (Wallenfeldt). Abraham Lincoln was born on February 12 1809 and Frederick Douglas was born on February 14 1818. Abraham Lincoln was the one who issued the Emancipation Proclamation and the 16th president of the United States of America (Wallenfeldt). Frederick Douglas was an African American abolitionist, author and orator (Wallenfeldt). Both of these men were held dearly by the black community. Since their death’s the black community has celebrated their contribution to the African American Liberation and civil rights movement on the men’s birthdays (Wallenfeldt).

Turns out originally Black History month was actually Negro History week and as early as the 1940’s the month of February was transformed into Black History month. “With the ascendance of the American Civil Rights Movement and the rise of black consciousness in the 60’s, February became Black History Month” (Wallenfeldt). 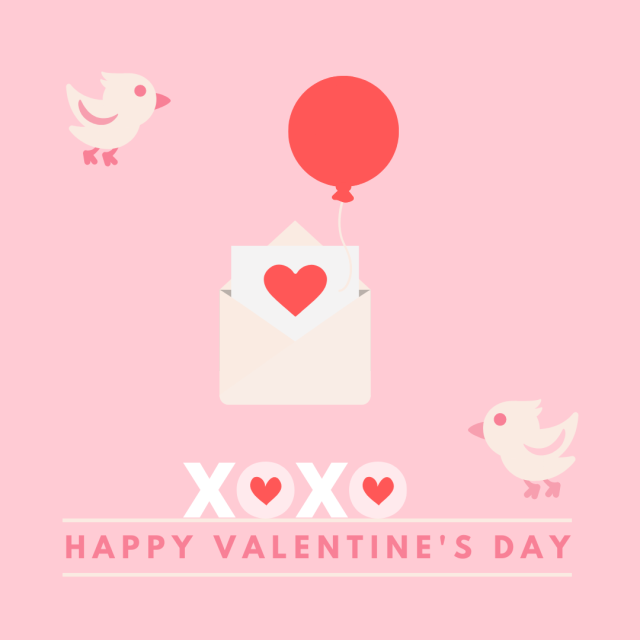 Today is Valentine’s Day and the STU library wants to wish everyone a lovely day. Hoy es el dia del amor y la amistad. Give everyone you care about your love; your family, your love, and your friends shower them with the most important feeling, love.

Even though today is a day filled with love, kisses, and chocolates, the origin is actually very dark and gruesome. Back when the Romans, from February 13 to February 15 was when they would celebrate Lupercalia(Seipel). Lupercalia was a celebration of sacrificing animals and doing a tradition that would supposedly make women more fertile. This festival celebration was also used to couple up men and women and if the match was right they would marry them (Seipel).

The day is now known as Valentine’s Day which is the day of love. Such a beautiful holiday started out as something so gruesome. It’s strange to process this fact but I am pretty sure many people were wondering how did this holiday, to show love, even started.

As mentioned in the previous posts, The STU main Library have Fitness Desks available for students to be able to study and exercise at the same time. It is not just the brain that has to have a work out, the muscles within the body need to be strengthened too.

On the website Healthline, Gregory Minnis a man that specializes in physical therapy discusses about the benefits of a Stationary Bike Workout. It boosts cardio fitness, along with improving other aspects in health such as :

Having a Stationary Bike Workout can also help with weight loss, body fat, strengthens the legs and lower body muscles. This type of workout is known as a low-impact workout, it allows for interval training, and it is safer than road cycling (Minnis).

Studying helps strengthen the brain. It improves reading, writing, and the skills associated with the subject one is studying. It helps with the speed one does certain tasks. Studying improves and expands knowledge.

With the STU Fit Desks students have the availability to gain all these benefits from the Stationary Bike Workout and the Brain Workout, studying.

The library is a sacred area for students. Many people consider the library to be specifically only a study area.

But, What if besides working your brain, you can work your muscles too?

The STU Library gives students the opportunity to do just that.

Because of the Fit Desks students can study and exercise at the same time! Making the library more than just a study area for students. 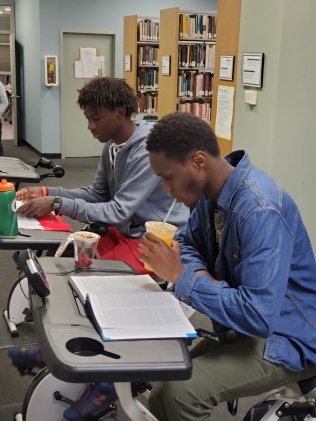 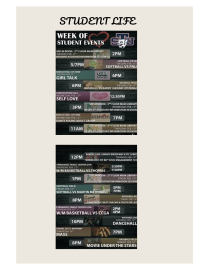 Take time to learn the hours for our STU library staff so they can help you with your needs!  Reminder, the library is not open on Holidays.

Always remember to appreciate the library.

As well as, the Archbishop John C. Favalora Museum and Archive still have up the beautiful Divine Connection art exhibit for everyone to admire.

Don’t forget about the upcoming events.

On February 27th we have the presentation for 7 things to know to get funding for your business book by Dr. David Doriscar and March 2nd-6th we have our Book Fair.

To help the Bob cats that want to participate in the Bobcat life we have also put in the Newsletter the events happening this week.

Here at the STU library inside The Archbishop Favalora Archive & Museum, on February 6, 2020, a beautiful exhibition Divine Connection: The WORD through ART opened, and was presented by the artist himself Roland Woods, Jr.

His Faith in God is so strong that he wanted to make works of art to represent his take on the many Holy verses, and on the beautiful story of our lord. The lord and the bible was his inspiration for his creations. He took time to worship God in such a creative and amazing form. From many paintings to even a poem: His Word

“The word of God never fails, This truth the bible tells. It is perfect in every way, It is light from day to day. Glory in what it says, As it leads you in the way. Meditate in it without delay, As you continue to pray. It is a lamp unto our feet, Daily bread we must eat. It is the living word of our King. All the fullness of God it brings.” – Roland Woods, Jr.

Here we have works of his:

Students are always stressed about their studies and are always finding a quiet space for them. They need an area where they can feel comfortable and can continue their studies with the convenience of what is surrounding them. Students at STU consider the library to be the ideal space where their mind can focus on their goals.

The library has always been known as a quite space. Students may take the library as a location for their self, study, and social needs. It is, as well, an area with an appropriate distance from their classes. It provides valuable resources for the students such as books, computers, and tools that they may need. The STU library also has the convenience that there is an entrance to Einstein Bagels for whenever a student needs a lunch break.

The library has had a powerful impact on many of our students. They like to use their voice and some STU students have anonymously given their feedback about the library:

“It’s a cozy place to spend time hanging out and study, and it has convenient food nearby” – Student A

This student has spoken about the convenience that exists of having everything near them in their area of where they study and take as a social space.

The library because of it’s environment and being a quiet and friendly area, students can feel it is the only place they can claim as their study space.

Students may stress about their studies and try to find a place for themselves. However, they have taken the library as their own sacred space. The space where they study, eat, and socialize. The warmth of the area and the friendly environment of the library makes them feel as if the library is their second home. The library provides to the campus community with valuable resources, and has a powerful impact on them. It is the ideal place for student minds. We’re throwing it back to how this amazing building first looked like in the 1980’s and how it looks now. How great it is to see how far we’ve come!

Appreciate the written path to another world, and to more knowledge. Students already want to be part of the fun and celebrate National Shelfie Day.

Welcome to Life at the Library. A place for STU Library staff to share their insights and reflections on librarianship.

Visit the library's homepage for more information on the STU library.